The FCA’s Financial Lives Survey elevates the UK’s financial regulator alongside Stephen King and Mary Shelley to the upper echelons of horror writers.

It is probably the most frightening thing I’ve read in a long time. Here are just a few highlights: 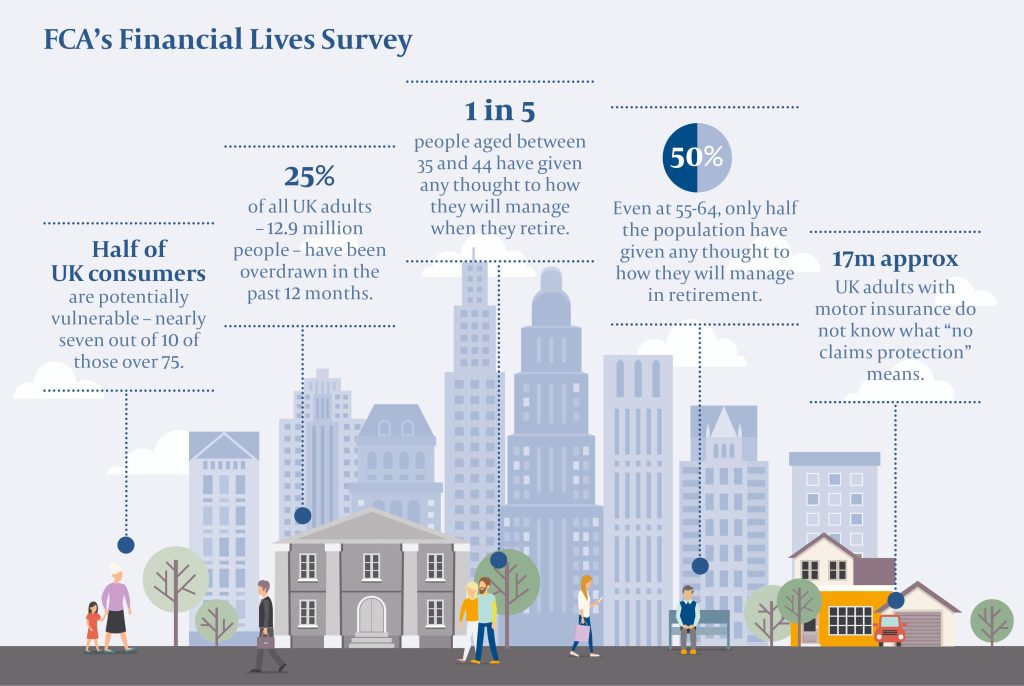 I think the retirement planning figures are the most worrying. When you’re young the priority has to be getting on the housing ladder and paying down debt, but it’s still good to start pension saving. Once you are heading into your 40s it is really time to be thinking seriously about how you will fund a comfortable retirement. By your late 50s and early 60s it may well be too late.

Many people do have pensions (boosted, no doubt, by auto enrolment), which is a relief – 61% of 25-34 year olds have a private pension they are yet to access; 71% of 35-44 year olds do. But is this leading them to a false sense of security?

I think a lot of people assume that because they are paying into a pension at work they will be fine, but typically contributions are around the 3%-4% level. In reality, given how long we expect to live, people need to be saving much more than this.

The International Longevity Centre ­– UK suggested earlier this year that young Britons should be aiming to put away at least 18% of their salary if they want the kind of retirement lifestyle enjoyed by many pensioners today. They suggested that people retiring today are doing so on incomes worth 76% of their average earnings.

Each person’s circumstances and expectations are different, so it is hard to put a number on what you should save. It is clear, though, that the later you leave it the more you will have to put away.

The FCA’s research suggests to me that millions of people are going to get to retirement and then it will suddenly hit them that they’ve not saved enough and that they have a pretty impoverished existence ahead of them.

The report also highlights the fragility of household budgets. This is surely another driver to keep interest rates low. A sharp hike in interest rates could be unbelievably damaging for so many people.

We cannot expect people to save for retirement if they do not have the money, but if the problem is simply that they aren’t even thinking about it, then we clearly have a serious job of education to do.

You should not act on this content without taking professional advice. Opinions and views expressed are personal and subject to change. No representation or warranty, express or implied, is made of given by or on behalf of the Firm or its partners or any other person as to the accuracy, completeness or fairness of the information or opinions contained in this document, and no responsibility or liability is accepted for any such information or opinions.
The value of an investment and the income from it can go down as well as up and investors may not get back the amount invested. This may be partly the result of exchange rate fluctuations in investments which have an exposure to foreign currencies. Fluctuations in interest rates may affect the value of your investment. The levels of taxations and tax reliefs depend on individual circumstances and may change. You should be aware that past performance is no guarantee of future performance.