Filtering out the market noise

As governments and central banks start talking about plans to reduce the levels of economic support put in place during the COVID-19 crisis, we could see choppy waters for investors.

Loose monetary policy and highly favourable financial conditions, combined with exceptionally low interest rates, have supported asset prices over the crisis, especially equities. As the adrenalin shot of these measures wears off, growth may be a bit slower and we could see some uneven economic data.

But we don’t think investors should turn defensive. Consumers and corporates are in good shape thanks to fiscal support from governments and moves to normalise monetary and fiscal policies are an important endorsement of the view that the global economy is returning to health. We think that quality companies with sustainable business models will continue to thrive and gain.

Risks remain, of course, not least the potential for new variants of COVID-19 to trigger fresh lockdowns. We’re keeping these risks in view, but we’re still of the opinion that a positive position in equities will benefit from the gradual return to normal for the global economy.

August at a glance

The Chinese government announced some important regulatory changes in the way companies are run. As a result, some investors have edged away from exposure to Chinese companies, driving prices down. While regulation is a risk that needs to be monitored and priced-in, we’re maintaining our position as we look at the long-term prospects for the country.

Chinese equities have had a difficult year, suffering relative to other markets and in negative territory by many measures. This follows several years of strong out performance, demonstrating the impact that the concerns over regulation have had on investors’ enthusiasm for the region.

After two years of outperformance, Chinese shares have struggled in 2021

There are clear reasons for investors to be interested in China. It’s the world’s second biggest economy and has been growing at a significantly faster rate than developed economies for many years. 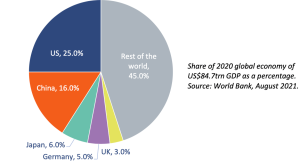 Past performance should not be relied on as an indicator of future returns.

Chinese companies have been on the front foot of tech hardware for many years. Notably, Apple products like iPads and iPhones are manufactured in China, and brands like Huawei, Tencent and Lenovo have carved out substantial global market share. As well as hardware, China is home to internet marketplace Ali Baba, which rivals Amazon as an online retailer and e-commerce site.

In common with governments the world over, China is addressing concerns raised by the rise of tech companies. These include the increasing power they have to influence consumers, their role in national security and the impact that the sudden wealth of tech entrepreneurs is having on the creation of a balanced and equitable society.

In our view, an exit from China would be premature. Chinese companies are likely to remain vital players in the tech sector for many years and the government is unlikely to introduce regulations that put this at risk.

Tapered look back in fashion

Commentators have been scrutinising remarks from the US Fed that indicate that they could be about to announce a retreat from its bond buying programme. This is known as “tapering”, as the central bank begins to wind down its purchasing programme, and even reduce its holding of bonds.

This is important because a shift in direction of Fed policy could move markets worldwide. Many will remember the ‘taper tantrum’ of 2013, when undisciplined messaging from the Fed led investors to panic over the prospect of an imminent withdrawal of the bond buying programme. This time around, the Fed has been more careful about what it says. But lately the tone has changed from “talking about thinking about it” to “talking about doing it”.

All eyes were therefore on the annual conference of central bankers at Jackson Hole in Wyoming last month to see if Fed chairman Jerome Powell would announce a timeline for withdrawal of support.

As it turned out, Powell remained circumspect. Tapering remains on the Fed’s agenda, but he counselled caution over the spread of the Delta variant of the COVID-19 and the possibility of further lockdowns.

He was also careful to underline that decisions over tapering the bond purchasing programme and on interest rate levels would remain separate. So, even if bond repurchases start reducing this year, the Fed rate is likely to remain at its current low level for some time.

The Fed’s measured approach has reassured investors. As economic activity gathers pace, the problems that this round of bond buying sought to alleviate are likely to resolve, and equity valuations will be supported as the economic cycle returns to normal.

Past performance should not be relied on as an indicator of future returns. Source: Bloomberg/James Hambro & Partners. September 2021