“There was a belief in the revolution and the future, a feeling of having suddenly emerged into an era of equality and freedom” – George Orwell (1903-1950). 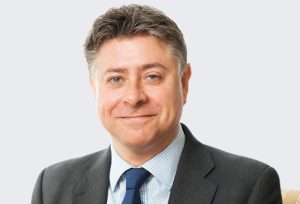 The above quote is taken from Orwell’s Homage to Catalonia, his personal account of his experiences during the Spanish Civil War. It represents his view of Barcelona’s public mood in December 1936, arguably the apogee of the social revolution, as Catalonia sought increased autonomy and independence from Madrid’s central government. Wind forward the clock to October 2017 and this region has just held a highly disputed referendum that separatist leaders triumph as a call for full independence. A major difference this time is that, rather than seeking an anarchist workers’ republic in which all are equal, many have voted for secession as they believe that Madrid takes an unfair economic allocation away from one of Spain’s most productive and wealthiest regions. 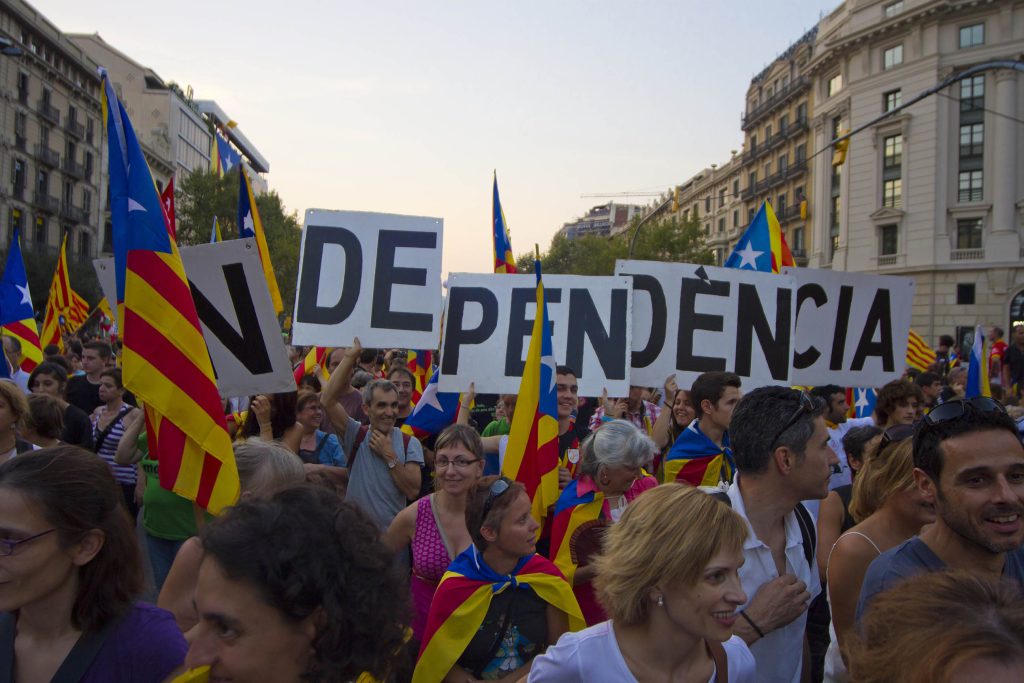 The third quarter of 2017 saw further modest gains for equity markets, which ended the period near all-time highs, exemplified by the Dow Jones Industrial Index’s eighth consecutive quarterly gain, the longest winning streak since 1995. The world economy expanded as economic data releases surprised on the upside and there was a more confident ring to company announcements, supported by improving corporate earnings. In the background, political tensions rumbled on. The more recent populist questioning of the advantages derived from membership of larger economic collectives has become a prominent theme running through politics: from Catalonia to pro-European Union Germany and France, Brexit Britain and President Trump’s America. In particular, there has been heightened scrutiny around the distribution of the economic benefits that accrue from being part of a larger ‘club’, whether that is the World Trade Organisation, European Union or North American Free Trade Area.

Why do many voters feel that they have not participated in the improving global economic recovery that has been accompanied by rising asset prices? Figure 1, below, shows that unemployment has rapidly fallen to around 4.5% in both the US (red line) and UK (blue line), with the latter marking the lowest unemployment rate since 1975. 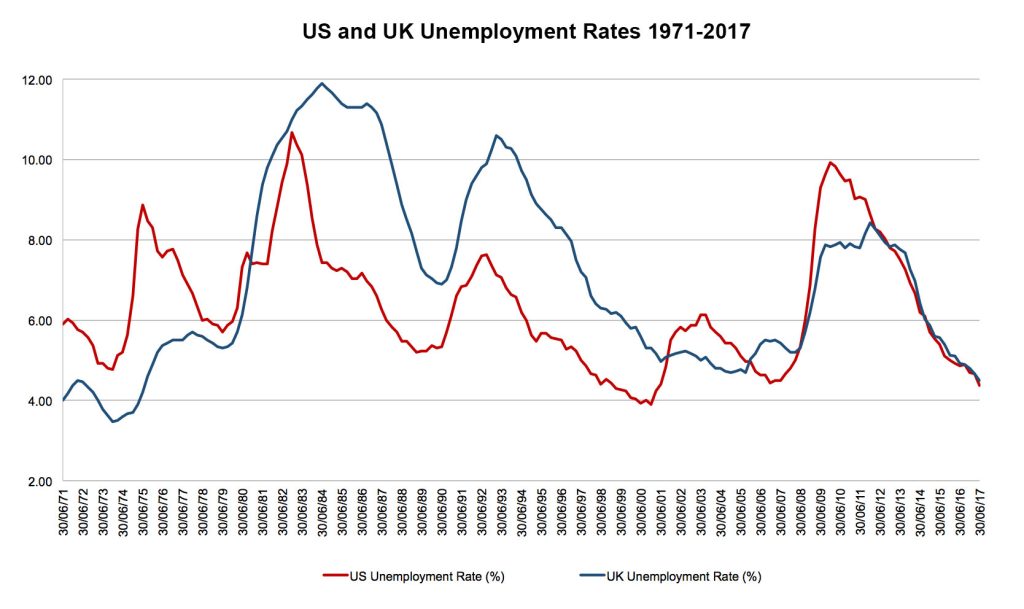 There may be full employment; however, average earnings and disposable incomes in both countries have barely improved for those who are less well-off. Various reasons have been put forward to explain the rise of capital over labour in recent decades, including greater global competition via broader trade agreements and the outsourcing of jobs to lower paid workers in developing economies, through to the disruptive effects of innovative technological advances.

We have already become accustomed to images of modern factories, such as in the car manufacturing industry, with their production lines dominated by robots and humans barely visible. Yet aside from manufacturing, there are other large sectors of the US and UK economies that could be further affected by the onward rise of technological innovation. Figure 2, below, shows various occupations in the US that currently provide millions of jobs towards the lower range of the wages spectrum, with retailing staff and bank cashiers topping the list. Similarly, in the UK the Office of National Statistics estimate that 20% of all low wage jobs are in the retail sector. With an increasing number of consumers shopping and banking on-line, it is no wonder that Amazon continues to gain at the expense of quieter shopping malls and the UK has seen banks close branches and more ‘to let’ signs in shops away from prime high streets locations. President Trump appears to have been partly elected by those voters who suffered both disproportionate job losses and a decline in their spending power. Similarly, in the UK, the squeeze on lower-income households, job insecurity, Brexit and the perceived inequality within society, allied to discordant austerity measures have helped cause a shift towards Jeremy Corbyn’s leftist Labour Party.

Politics, especially in the UK, is therefore likely to remain towards the top of our agenda, a potential threat to our still-held central view of a world gradually returning to normal. Against this improving synchronised economic backdrop, central banks have made louder noises about the necessity of raising interest rates, causing some sharp adjustments in bond and currency markets. However, there are still few signs of excesses and we are mindful that policy makers do not want to suddenly choke off the economic expansion: we therefore expect these rate increases to be modest and telegraphed well in advance. The stock market rally is becoming somewhat long in the tooth, but valuations are not at extremes and we remain modestly underweight equities. This is principally due to our positioning of portfolios such that they are not over-reliant on the uncertainties around sterling and the UK domestic economy, preferring international equity markets and UK stocks with significant earnings in overseas countries. 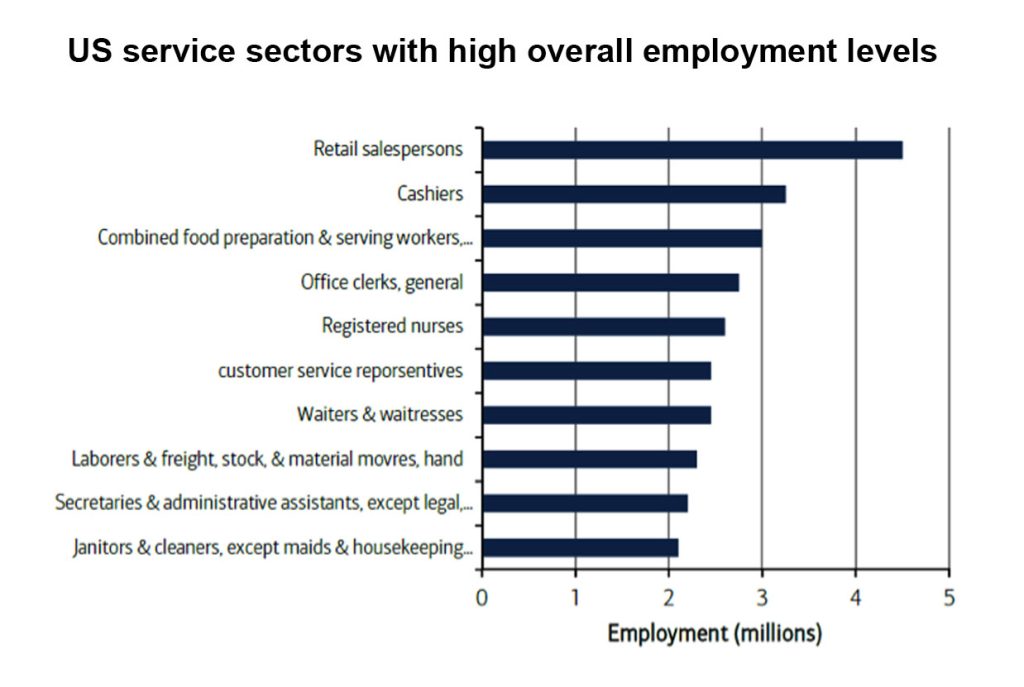