“Only buy something that you’d be perfectly happy to hold if the market shut down for 10 years.” – Warren Buffett 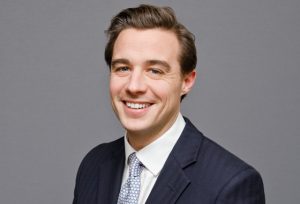 Throughout history technological enhancements have contributed to the evolution of the way humans work, communicate and spend their leisure time. However, the exponential growth in computing power and the expansion of the internet appear to be accelerating that evolution, disrupting traditional routes to market, eroding historical barriers to entry and putting many incumbent market leaders at risk.

During 2017, the 9% decline of US department store shares, compared to the 19% increase in the S&P 500 index, is a subtle illustration of technology’s effect on consumer habits and how headline returns can mask the widening divergence between winners and losers.  In that same period, Technology and Consumer Discretionary stocks saw an aggregate increase of 36% and 21% respectively[1] (see Figure 1). 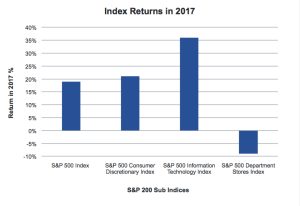 When James Hambro & Partners was established in 2010 we placed at the heart of our investment philosophy a determination to invest in companies that not only have a simple yet proven business model but also critically are driven by strong and decisive managers.

Clichéd as it is to cite Mr Buffett nowadays, the quote above neatly encompasses how we approach all our investment decisions.  In this context and given the tragic passing of Richard Cousins, the Chief Executive of Compass Group, it would be remiss of us not to illustrate why Compass and Cousins embody much of what we look for in both company and manager. 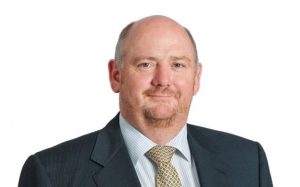 The late Richard Cousins was an outstanding and much admired CEO

Since 2010, Compass, the world’s largest catering company, has been a lasting presence in most of our clients’ portfolios, delivering a total return of 330% versus the FTSE AllShare Index, which was up 100%[2].

When Cousins took over in 2006, Compass was struggling but at the heart of the company was a simple business with an understandable proposition – a catering specialist poised to benefit from the increasing trend for enterprises to outsource. In Richard Cousins, we saw an uncompromising and focused individual with a clear strategy, a dislike for the limelight and a determination to get on with the job in hand. He recognised the potential for the company to flourish by focusing on the provision of catering over and above the multiple-services offering of competitors. He succeeded in building the largest buyer of food in the US by a factor of four, giving Compass a significant competitive advantage. Greater scale, higher quality and lower costs to the customer augment the strong rationale to outsource, thus providing Compass with a sustainable and predictable source of growth (see Figure 2). 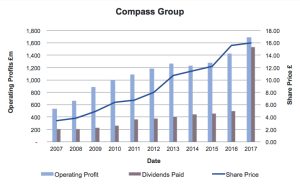 Turning to the wider picture, tactically our client portfolios started 2017 with a cautious tone relative to previous years as we looked for evidence of fundamental economic strength to justify the elevated valuation of the market. As the year progressed, economies around the world improved, driving higher corporate growth and profitability. Recognising this, we increased exposure to equities in February. The shock result of the UK election and the continued uncertainty around Brexit left us, as in 2016, preferring international companies, and having made strong gains in Asia and technology companies, we took profits during the summer, redistributing the proceeds to Japan, Europe and cash. The majority of asset classes ended the year in positive territory but equities significantly outperformed, up 19%[3], as earnings growth, rather than valuation expansion, pushed markets higher.

Looking ahead, rising growth and higher inflation may lead central banks to raise interest rates faster than indicated bringing to an end the ‘Goldilocks’ period of stable growth and low inflation that has formed the positive backdrop for equites in recent years. Portfolios, therefore, remain carefully balanced with a significant underweight in fixed income and, more recently, a marginal underweight in equities. The remainder is held in more defensive assets including gold, absolute return funds and cash, which we hope will offer more protection, should interest rates rise faster than forecast.

Technological advancements and changing habits provide an attractive backdrop for active managers. As we enter 2018, under the new regulatory regime of MiFID II, we have put the resources in place so that we can continue to focus our research efforts on finding companies with sustainable demand, recognisably favourable tailwinds and limited potential for disruption; as we like to say, good companies in good neighbourhoods. Equally, we will continue to look for managers who, like Richard Cousins, can articulate a clear strategic direction and provide the leadership to allow good assets to become fantastic investments.  In an increasingly complicated investment landscape we believe our investment philosophy remains as relevant today as it did when this business was founded eight years ago.

[3] Data from Bloomberg for the calendar year 2017