Global equity markets measured by crude PE ratios are at the top of historical ranges in most markets (except in Japan – see figure one). More worryingly, the cyclically-adjusted, longer-term Shiller PE ratios show the US at levels only exceeded at the end of the 1920s and 1990s bull markets. So should investors be worried? Are markets overvalued?

Donald Trump’s inauguration this week could prompt a more balanced assessment of investment prospects and there may well be a pressure-cooker moment when markets in many countries let some steam out, as they did last February. 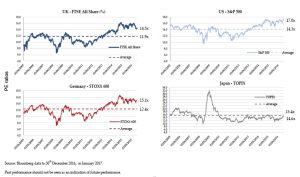 Figure one: PE ratios of key equity markets since 2005

A correction may bring with it buying opportunities. We believe the recent stock market surge in the US in particular reflects market confidence in Trump’s approach to fiscal stimulus. In the FTSE 100 it has been more about currency movements, but there is talk of fiscal stimulus here too.

Some are concerned that fiscal stimulus would lead to rising interest rates and inflation. Figure two shows how inflation expectations are rising sharply in the US and the UK. The charts show the 10-year break-even rate. This is a market-based measure of expected inflation – the difference between the yield of a nominal bond and an inflation-linked bond of the same maturity. 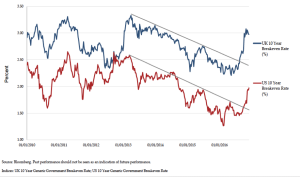 We should not be afraid of an increase in inflation if it is gradual and controlled. We may have become unaccustomed to it, but inflation can be a sign of economies working normally. What has been relatively abnormal is the low-interest/low-inflation environment we have experienced since 2008.

The financial crisis was caused by banks becoming too greedy and overleveraging. Many have now rebuilt themselves on more robust and sustainable foundations.

Quantitative easing has been the life support that has helped markets recover, and now we are beginning to see them able to stand on their own feet unaided again. There will be wobbles. Donald Trump’s unusual approach is naturally unsettling for those of us in the UK used to less “charismatic” politicians. Elections in Europe through 2017 and the end of the Brexit phoney war all make us wary. But economic recovery­ in the US looks encouraging and this could be expected to have major benefits for other economies, including ours.

Given the current valuations, we are often asked by new clients handing cash over to us to manage whether now is a good time to invest. Unless market opportunities are particularly enticing, we would normally expect to drip-feed money in over time. Similarly, for those adding substantially to their existing portfolios, we would probably be wary about piling money immediately into equities when valuations are so high. On the other hand, investors do need to remember the eroding power of inflation on cash.

Two axioms come to mind: “Time in the markets, not timing the markets” and “Markets climb walls of worry”. Market timing is very difficult and those who try it often end up worse off (as investors who piled out of the FTSE 100 in the immediate aftermath of the Brexit result have found).

In times like this we believe there is an element of fortune favouring the brave – though not the reckless. Our portfolios typically have 10% cash, reflecting some of the uncertainties and our concerns about the lack of downside protection currently provided by bonds, which might ordinarily be expected to play a bigger part in portfolios.

We expect to continue favouring equities over bonds (particularly given concerns about inflation). We will be selective, continuing to prioritise cash-generative companies with strong managements, competitive advantages and the capability of delivering rising dividends. And we will seek to reduce risk wherever possible, remembering our key long-term priority of capital preservation.