James Hambro & Partners portfolio manager Mark Richmond-Watson ended a thrilling charity race at Ascot beaten on the home straight but congratulated by HRH the Prince of Wales and HRH the Duchess of Cornwall. 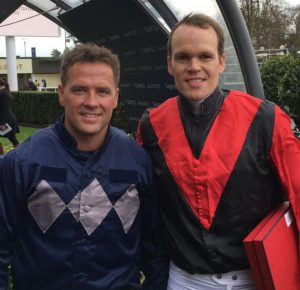 Chatfeild-Roberts, who recently qualified from the Royal Veterinary College, has worked in flat and jump racing yards and point-to-pointed for the last six seasons, riding over 20 winners.

Michael Owen, who had never ridden a horse until a few weeks ago, came a close second. Sheikh Fahad Al Thani ran in third. 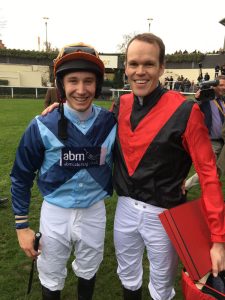 Richmond-Watson, whose efforts have so far raised nearly £6,000, said: “It was an amazing day. We arrived early to meet the fellow jockeys and walk the course, then into the weighing room with all the professional jockeys to get our kit on.

“I had to lose 10lb for the race, but hit the scales bang on 12 stone with all the kit. Then it was off to speak to the trainer. It was the first time I’d met the horse and ridden it. It was a two-mile hurdler and I was up against seven-furlong sprinters, so it was always going to be a tough ask to get the horse into the winner’s enclosure. The rest was a blur. I thought I’d be galloping down the finishing line looking around and taking it all in but I just had to concentrate on the race.

“The ground was soft so I was getting a lot of mud in my face from the leaders heading for home. I was in a good position coming round the final bend just behind Tom but as other horses kicked on my horse didn’t change gear.

“That said, it was still very fast. You could feel the power in the horse; I imagine it is like driving a Ferrari – it was controlled power. By the race end your legs are burning because you ride in a crouching position, trying to move with the horse.

“I’ve got the bug now. I’d love the opportunity to ride again – maybe next time over jumps! I’d like that – it would add another dimension to the race.” 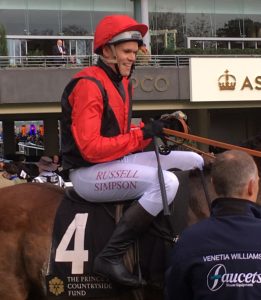 Mark Richmond-Watson, saddled up on One Star, trained by Venetia Williams, heading for the track.

Richmond-Watson thanked Hereford trainer Venetia Williams for lending him the horse, One Star. “There’s not much upside for a racehorse trainer in giving an amateur like me a horse to ride, so I was enormously grateful to her.”

HRH the Duchess of Cornwall and HRH the Prince of Wales, make a presentation to Sheik Fahat Al Thani, owner of Qatar Racing, who came third. Photo courtesy of The Prince’s Countryside Fund

Michael Owen chats with HRH the Prince of Wales and HRH the Duchess of Cornwall after coming second. Photo courtesy of Ascot Racecourse

Banner image: All the competitors with HRH the Prince of Wales and HRH the Duchess of Cornwall for a group presentation. Photo courtesy of The Prince’s Countryside Fund