The 30-year old portfolio manager has taken up the challenge to participate in the seven-furlong flat race on Friday (24th Nov) to help raise money for charity.

It will be the first time he and 37-year-old Owen, who is now an established racehorse owner, have ever raced. They will be competing against a field of 11 that also includes Tom Chatfeild-Roberts, son of Jupiter fund manager John Chatfeild-Roberts, and Sheikh Fahad bin Abdullah Al Thani, who runs Qatar Racing – one of the world’s most successful stables.

Richmond-Watson said: “This is going to be the real deal. I’ve ridden all my life and used to play polo so I’m not scared of horses, but this is the first time I’ve ridden a thoroughbred that’s still in training and racing. They can reach speeds of 40mph and because the race is under a mile we’ll be galloping at top speed for much of the race, so it could get pretty hairy.”

The race is to raise money for the Prince’s Countryside Fund ­– a charity devoted to helping people in the countryside find work. It has given over £8.5m in grants to 220 projects since 2010 and helped more than 700,000 people. 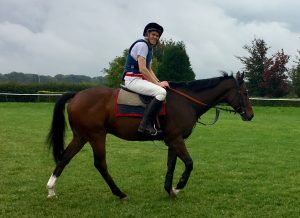 Mark Richmond-Watson in training at Newmarket. Pic courtesy of The Prince’s Countryside Fund.

Richmond-Watson has now been signed off to race by the British Horseracing Authority so has passed the first hurdle and welcomes sponsors as he aims to raise £5,000.

He says: “We had a day of training at the British racing school at Newmarket and the fitness test was pretty stiff. I’m proud to say I beat Michael Owen in the bleep test – a gruelling sprint stamina exercise. Whether I can manage that on the horse is another matter. He fell off a couple of times in the training session but he’s highly competitive.”

Owen, who played football for Liverpool, Real Madrid, Newcastle and Manchester United, says: “Everyone assumes I ride because I own a race yard but the only time I’d ever sat on a pony before this was when I was eight and on a holiday in Ibiza!”

Now he’s been doing some training with his own horses at his Cheshire yard, Manor House Stables. He says: “It’s been a vertical learning curve. I’ve found in life that a lot of things look easy until you try to do it yourself but when you see the boys up close and what they do you realise it’s nigh on impossible – and then you consider that they’re half your weight and controlling half a tonne of animal! It’s fascinating how good they are and how difficult it has been to understand how to do it. I always want to win, however… just crossing the line will be an achievement.“

He says: “I understand Tom has done a lot of point-to-point riding, so I think he’ll be strong and Sheikh Fahad has raced a couple of times and by all accounts is relatively good. He spent £4.7m on a racehorse not long ago, but fortunately there is a rating limit. The horses will all be good but reasonably matched.

“The most exciting thing is racing on the hallowed turf of Ascot at the start of a day’s racing. That’s like playing cricket at Lords before an Ashes Test or rugby at Twickenham before an autumn international. We get to go in the jockey room to change and prepare, alongside all the professional jockeys. It will be an amazing buzz then to walk down the steps into the parade ring and afterwards gallop out to the start. That’s probably when I’ll get nervous!”

The whole weekend at Ascot, which includes a Christmas shopping fair, is dedicated to the Prince’s Countryside Fund. Tickets for the Friday race day, which includes a full day of professional racing,  are free. The weekend is expected to raise over £700,000.

All tips are based on individual views, and past performance is not a reliable indicator of future results. Conditions on the day may vary, and you should contact your turf accountant for the most up to date prices.