At the heart of the storms currently sweeping the financial markets is a crisis of confidence. The current policy environment, lacking decisiveness and co-ordination is holding the fragile global economy back. With the possible exception of Asia, virtually nowhere is there confidence in the political agenda being able to find practical solutions to slowing economic growth and sovereign debt worries. Sentiment has deteriorated towards extreme pessimism, fanned by fear of a global meltdown and deteriorating economic fundamentals. The policy response of central bankers has been to throw large sums of newly printed cash at the problem (quantitative easing, or QE). The jury is undecided whether this will arrest the slowdown caused by deleveraging of financial institutions, corporate balances sheets and household debt.

After the resilience and muddling through in the first half of 2011, markets suddenly took fright, leading to an aggressive sell-off during the third quarter. If July was relatively quiet, August and September exhibited fear and panic. The downgrade in August of America’s AAA debt rating triggered a 15% peak to trough fall in equities. UK and international equities ended the third quarter down by 14% and 15%, respectively. European equities fell by a remarkable 24% during the quarter, followed by falls of 19% and 18%, for emerging markets and Asia ex Japan, respectively. The main beneficiaries of the flight from equities, caused in part by sovereign bond concerns, were sovereign bonds themselves! Gilts rose by over 8% during the quarter.

Investors have positioned themselves for a ‘double-dip’ recession, if not outright depression, judging by the record low nominal yields (negative in real terms) available on government debt. They are hoping for a cathartic event, before contemplating re-investing into riskier assets, whether that event is another financial institution going bankrupt, apportioning existing losses or even allowing a European debt disaster to take place. Despite the fallout, uncertainty would be removed, as would the stasis caused by European policy makers and US politicians following their ineffective policy of ‘grudging incrementalism’. Matters are rapidly reaching a finale. It is our opinion that the policy tools that sufficed in 2008/2009 will be less effective in future. Further bouts of quantitative easing, to be given labels such as ‘Operation Twist’, QE2, QE3 and so on, may have a diminishing and inflationary effect, especially without co-ordination of effort. Interest rates in the Western world are almost at zero already. Furthermore, ‘austerity’ measures already instigated by some governments, may lower fiscal revenue generation and exacerbate the slowdown. We are not expecting the same quantum of market recovery that we experienced in 2003 and 2009. Rather, we envisage a scenario of grinding away from the trough, in a lower growth environment. With stagflation still a possibility, we think that UK inflation-linked bonds may assist as a good portfolio hedge against both policy induced inflation and deflation worries.

Asian and global emerging markets look somewhat different. In the future, we may look back and see the current weakness in their equities and currencies as nothing more than a dip in a steady uptrend. Thus far, there are currently few signs of a sharp deceleration in the massive structural growth story and policymakers have the additional benefit of being able to aggressively cut interest rates. The pie chart below shows what an equity universe might look like, adjusted for share of the global economy and if currencies were adjusted to reflect equal costs of goods, when expressed in the same currency. 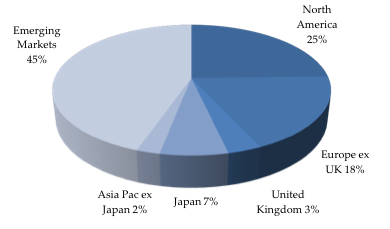 Compare the percentages in this chart (source – Cambridge Associates June 2011) with the following figures of the current investible universe (as defined by the MSCI World index): US equities represent 47%, Asia 6%, while Emerging Markets are just 13% of the index.

Going forward, then, Asia and emerging markets may represent a higher proportion of our equity and bond exposure, if not quite to the levels shown opposite and would take place over time. Europe and the UK may form a smaller part of portfolios, while the US will still remain important. Elsewhere, Japan looks interesting, insomuch as the economy is moving to a different beat to the rest of the world, following recovery from the recent natural disasters. We are finding plenty of interesting ideas surfacing amongst Japanese world class exporters and cheap domestic stocks.

Faced with so many uncertainties, patience remains our watchword. While valuations are more attractive, they are neither as stretched as they were in 2008, nor so compelling that we are prepared to increase the risks to our clients’ capital at the present juncture.