If only more governments, financial institutions and individuals had heeded the simple words of advice from the fictional Mr Micawber and ignored the fiction of their book-keeping. As the chart below shows, many governments have been consistently living beyond their means for the past 22 years and are now facing the consequences. France, Greece, Portugal and Italy from the Eurozone area led the list of nations showing the highest percentage of years with a budget deficit since 1989. Their expenditure has consistently exceeded their income. The dawning recognition of a need to balance the books, through fiscal and austerity measures, resulted in the euro crisis dominating financial markets in 2011. Countries outside the Eurozone need not sleep so easily; the US, China, UK and Japan also feature high on the list of profligate nations; indeed the US lost its top AAA credit rating during 2011, after a rating agency deemed that its amended budget plan did not go far enough to reduce the debt pile.

After the dramatic double-digit declines in equity markets in the third quarter, the final quarter of 2011 provided something of a relief rally. Further developments in the Euro crisis appear to have provided the catalyst for this turnaround: on rising expectations that policy makers could conjure a far-reaching solution to the crisis and accompanied by changes in the leaders of Italy, Greece and Spain, via the ballot box or resignation.

Percentage of years with a budget deficit, since 1989 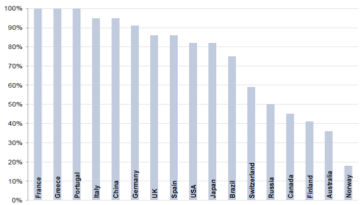 The majority of the quarterly gains in UK and international equities came from October, amongst the best monthly returns in ten years; November was a flat month, masking a 7% peak to trough decline and subsequent gain, while December was mildly positive as sentiment rose towards the year end. In contrast to volatile equity markets, UK gilts continued their steady progress during the quarter for an annual gain of over 15%, comfortably and surprisingly outperforming most asset classes. For 2011 as a whole, UK and international equities declined by 3.5% and 6.6%, respectively and the latter would have fared worse, if it were not for the 2.7% gain in US equities. Equity indices for Europe, Asia Pacific and Japan fell by between 13-15% in 2011 (figures quoted from FTSE World Indices, total return, sterling).

In our opinion, few of the issues facing the developed world have been conclusively answered. For all the rhetoric, policy response and practical implementation are difficult to predict. Europe continues to stagger along the precipice, hindered by disparate agendas, divergent economies, ponderous decision-making and ineffective governance. In spite of its own debt issues, the US corresponds most closely to our central ‘road- map’ of an initial sharp spurt in growth, caused by inventory rebuild and followed by a slower, capital expenditure-led recovery. While economic data has been unexciting, it has not been disastrous and although unemployment has yet to fall meaningfully, the consumer has been surprisingly resilient. The dollar has benefited. In contrast to a highly indebted government and households, US businesses look in rude health. As the chart below shows, US company profits have been growing at a faster rate than the sluggish economy, as represented by a greater percentage of gross domestic product (GDP). In addition, larger multinational companies appear to be outperforming their smaller brethren; the strong seemingly getting stronger in a more competitive landscape. Our focus, therefore, is to continue to hold high ‘quality’ investments; in equities, corporate bonds and funds. Longer term, we are looking more towards Asia and the Emerging markets. Equity valuations appear more attractive, albeit they are not yet compelling enough for us to deploy more capital. Investment grade non-financial corporate bonds are preferred to Western government conventional bonds. The latter’s yields have been driven down to historic lows by investors looking for somewhere to hide in a low interest-rate, uncertain environment. They may yet be found out. 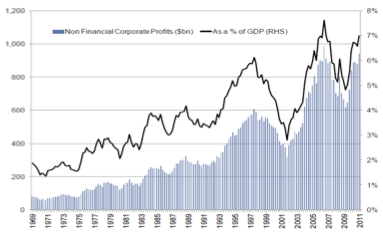 James Hambro & Partners LLP is authorised and regulated by the Financial Services Authority. The value of an investment and the income from it can go down as well as up and investors may not get back the amount invested. You should be aware that past performance is no guarantee of future performance.