“How great are the dangers I face to win a good name in Athens.”
Alexander the Great, ancient king of Macedon (356-323 BC)

The above quote could just as easily have been uttered by the present prime minister of Greece, George Papandreou, faced by striking trade unionists and rioting anti austerity protestors outside the parliament building in Athens. For now, it seems the crisis is averted, buying time for Europe to cobble together a sovereign debt solution for Greece that avoids the dreaded word ‘default’. But default must surely come, with Greece unable to meet its debt obligations, even if the fix goes by the name of ‘re-structuring’, ‘re-profiling’ or indeed ‘roll-over’.

Meanwhile, markets continue to muddle through. Relief at the avoidance of an imminent Greek default allowed global equity markets to rally between 4-5% at the end of June, to finish modestly ahead, after a flat May and positive April. Overall for the quarter, the UK FTSE All-Share gained 0.9%, international equities (FTSE All World ex UK) fell 0.8% and fixed income gilts returned +1.7% (all capital returns in sterling). Within gilts, index-linked outperformed conventionals, which in turn outperformed corporate bonds. Despite Eurozone sovereign debt worries, Europe ex UK was amongst the strongest performing developed equity markets, while returns from the US, Japan and Asia ex Japan were essentially flat. Given the large amount of monetary stimulus provided by Western governments that has leaked into riskier asset classes, it was unsurprising that the potential ending of such support saw the worst quarter for commodity investors since 2008, with prices coming off near 100 year highs. Gold proved relatively robust, peaking at $1563/oz in early May, before ending the quarter at $1504/oz, Brent crude oil declined by 5% during the period and wheat futures declined by 27% (all performance numbers in sterling).

Macroeconomic data releases are dominating sentiment at present, with the markets wobbling around, depending on ‘good’ or ‘bad’ data, relative to consensus expectations. The prevailing issues, ranked in no particular order, are the aforementioned Eurozone sovereign debt concerns, possibility of a hard landing in China, US debt ceiling, worries about rising global interest rates, slowdown in the US economy, ‘exit strategies’ from monetary stimulus programmes and rising inflationary pressures, possibly adversely impacting corporate margins. Disappointing manufacturing data has been latched upon by advocates of a ‘double-dip’ recession, although these rarely happen and our view is that we are more likely to be witnessing a slowdown within a recovery. While we recognise our limited ability to forecast short term directional moves in macro-economic data, we maintain our central case that we are within a normal business and market cycle, albeit one with a lower growth trajectory: inventory build leads to a capital expenditure recovery, followed by higher employment and a consumer recovery. While risks have increased, there seems to be an excessive degree of pessimism around at present, much of which may already have been priced into markets.
When the deflationary impacts of high levels of developed country government and personal debt are counteracted by loose monetary policy, the result is likely to be moderate growth and inflation in the West, but higher growth and inflation in the developing economies. Whereas the latter are aggressively tightening interest rates, we are likely to see the US and UK maintain their rates lower for longer than investors originally anticipated. Asian and developing country currencies may continue their appreciation against the US dollar, sterling and the euro, but we are wary of the commodity currencies, such as Australia, Canada and Norway. Faced with low returns and macroeconomic uncertainty, the search for yield will continue, with equity markets expected to move largely sideways, despite reasonable valuations.

The chart opposite, covering the period 1925 to present day, shows that when equity markets, highlighted by the bold red line, are range-bound (i.e. between the two sets of red dotted parallel lines), dividends have had a greater influence on the total return of equities. Within our portfolios, a central theme has been investing in those companies offering secure dividends with the potential to grow those dividends, unlike high-yielding ‘value-traps’ or indeed conventional bonds with their static income stream.
Markets may also reward those companies with certainty of earnings, growth or pricing power, such as luxury brands, exposed to less-constrained consumer expenditure in developing markets. Likewise, staples may also perform better, now that their growth potential is less highly differentiated from cyclical or ‘growth’ sectors. 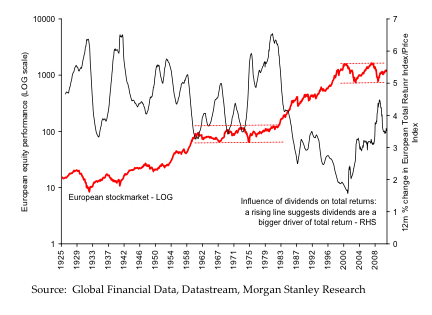 Looking ahead to a mean-reverting, lower return scenario, it seems wise not to take too much risk with capital. Rather, we have taken some profits and re-allocated to lower volatility, absolute return strategy funds and assets non-correlated to equities, to supplement our stock-picking capabilities.