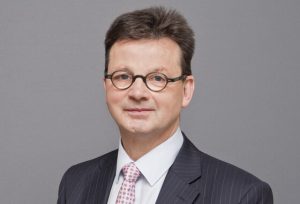 We know the government is racking up a huge debt for its response to Covid-19. We weren’t expecting the bill to land in the Budget, but we know it’s coming. Today Rishi Sunak began to flag up who will pay for it and how.

First, let’s look at the debt. Borrowing is at its highest outside wartime. The budget deficit is likely to be £280 billion this year, and public sector net debt is forecast to rise to £2.8 trillion by 2025/26.

The government had little option but to spend as it has. The economy shrank by 10% last year – the largest fall in 300 years; 700,000 people have lost their jobs since March.

But recovery is coming. The OBR expects the economy to return to pre-Covid levels by the middle of next year.

The Chancellor has a difficult job in building the momentum behind that recovery. Today he announced a raft of extensions to support schemes that can keep businesses hanging on in there until we are all vaccinated and some sense of normality has resumed.

And so to that bill. There were two key announcements that might affect clients significantly.

The freezing of allowances until 2025/26

The income tax threshold will rise in April to £12,570. The 40% higher-rate tax will kick in at £50,270 and then both will remain frozen there till the end of this Parliament in 2025/26. That is expected to generate the Treasury £1.5 billion next year but will rise to £8.1 billion a year by the next election, demonstrating just how many people will be caught by this freeze.

The freezing of the Pensions Lifetime Allowance at today’s rate of £1,073,100 – remember it used to be £1.8 million – will generate £300 million a year for the Treasury by 2025/26. It really doesn’t seem worth it, given how complex this charge is to understand and administer.

Over time, though, this may come to be a major earner for the Chancellor. As our table below shows, it won’t just hit the super-rich. In the coming years it’s going to affect many ordinary people, including teachers and civil servants, who have worked for a long time in skilled jobs with final salary pension schemes. 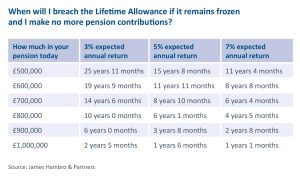 A growing number of people are going to have to think about this in their retirement planning. We have written elsewhere about whether you should worry about this charge. You should certainly think about it and discuss it with your adviser.

Though he didn’t use these words, the Chancellor was keen to stress that these tax freezes aren’t a stealth tax. He was being explicit about them. “We are not hiding it, I am here, explaining it to the House and it is in the Budget document in black and white. It is a tax policy that is progressive and fair.”

Of course, this will affect nearly all of us who have pensions and who rely on these companies to either reinvest their profits in further growth or distribute them as dividends, but we shall overlook that.

The rise in corporation tax is expected to generate £17 billion in revenue by 2025/26. The new rate is still lower than that paid by companies in other G7 countries, and there’s no sense that cutting corporation tax did much to stimulate inward investment in the UK.

The thing that strikes you when you look at these headline numbers is that these tax rises and freezing allowances don’t generate that much when compared with the £280 billion budget deficit and the £2.8 trillion debt.

The hope is that other measures mentioned today to stimulate the economy will also generate plenty of tax revenue. Certainly there were some interesting initiatives announced, like the free ports and the ‘super deductor’, which allows businesses to reduce their tax bill by 130% of their investment in new qualifying plant and machinery – part of a drive to improve Britain’s productivity.

The Chancellor also flagged up some interesting environmental initiatives, like a voluntary carbon offsetting scheme. We look forward to seeing more on that.

If these initiatives don’t kick-start a vibrant, low-carbon British economy then we can expect more tax rises and public spending cuts. You can’t help feeling that what we heard today, unpleasant as it might be for some people, was just a taster of what’s to come. But how else do we pay for Covid?

The key takeaway is that good tax planning will become more important than ever. There are ways to mitigate some of these creeping taxes, and the sooner you address these issues the better. Do call your financial planner if you have any concerns.

Are these stealth taxes?

Are these stealth taxes?

We know the government is racking up a huge debt for its response to Covid-19. We weren’t expecting the bill to land in the Budget, but we know it’s coming.…

Continue reading
Should I worry about the Lifetime Allowance?

Should I worry about the Lifetime Allowance?

It’s one of the most complex tax charges on the records – you virtually need a degree in financial planning to understand it. And it’s slowly creeping up on more…

Responding to the 2020 spring budget, Sean Jones, said: “The Chancellor spoke a lot about getting things done, but in personal finance terms, this was perhaps not surprisingly a ‘do…