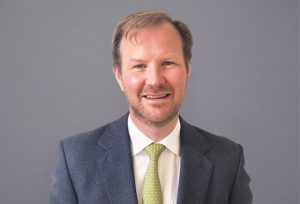 The first confirmed case of Coronavirus in the UK was on January 29th 2020, when a Chinese student in York and his mother, recently arrived from Wuhan, called the NHS to report flu-like symptoms. Just five weeks later the contagion reached the financial markets.

March 2020 saw the fastest bear-market drop in Wall Street’s history. European markets also suffered their worst-ever month. On March 9th the FTSE 100 plunged by over 8% in one day. By March 23rd Britain was in lockdown.

Yet, while the human cost of the pandemic was worse than many feared, stock markets recovered remarkably quickly.

A year on, as national vaccination programmes gather pace, investor confidence has grown. Governments continue to pledge massive support for economies still hamstrung by pandemic-related restrictions. In last week’s Budget Rishi Sunak set aside another £65 billion to support workers and businesses. In the US an estimated 160 million people will shortly receive a cheque for $1,400. This will be the third direct injection of cash since the start of the pandemic, bringing Coronavirus-related expenditure there to some $8.5 trillion. Unsurprisingly, many economists expect a rapid growth in spending and a strong economic bounce. 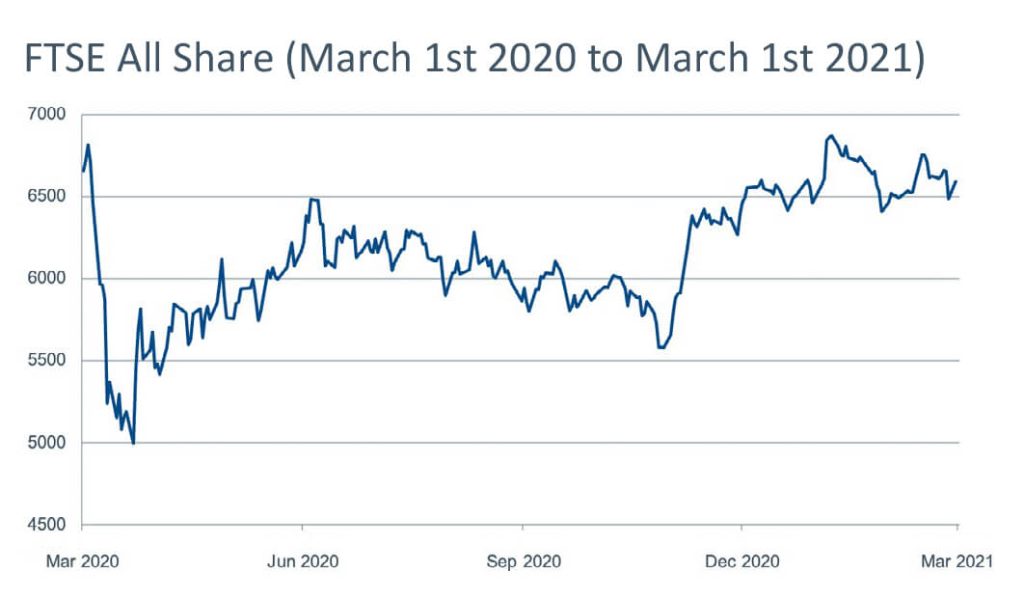 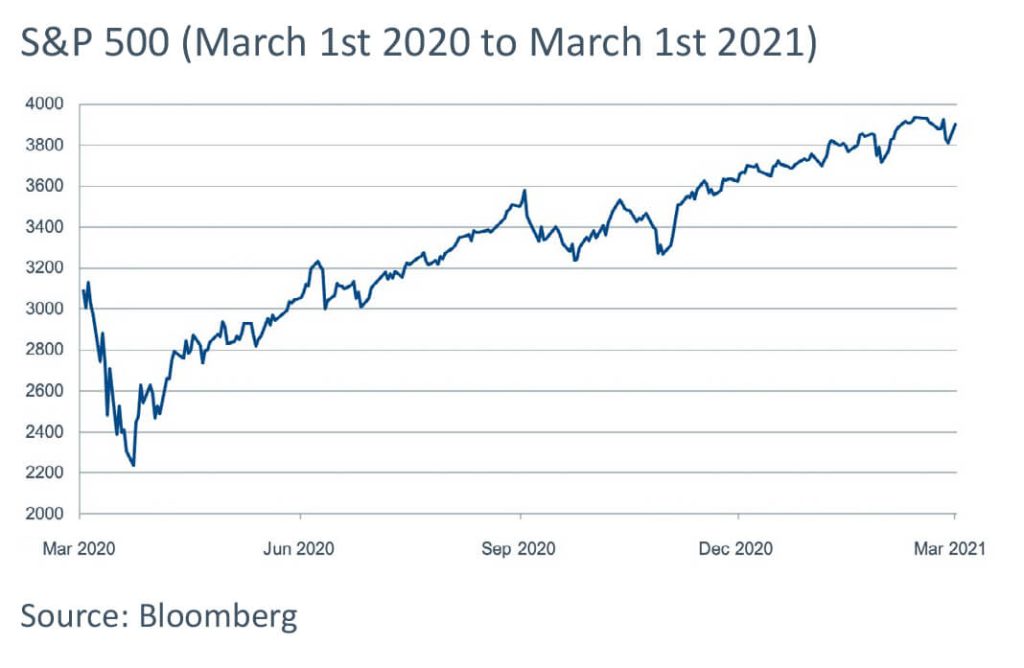 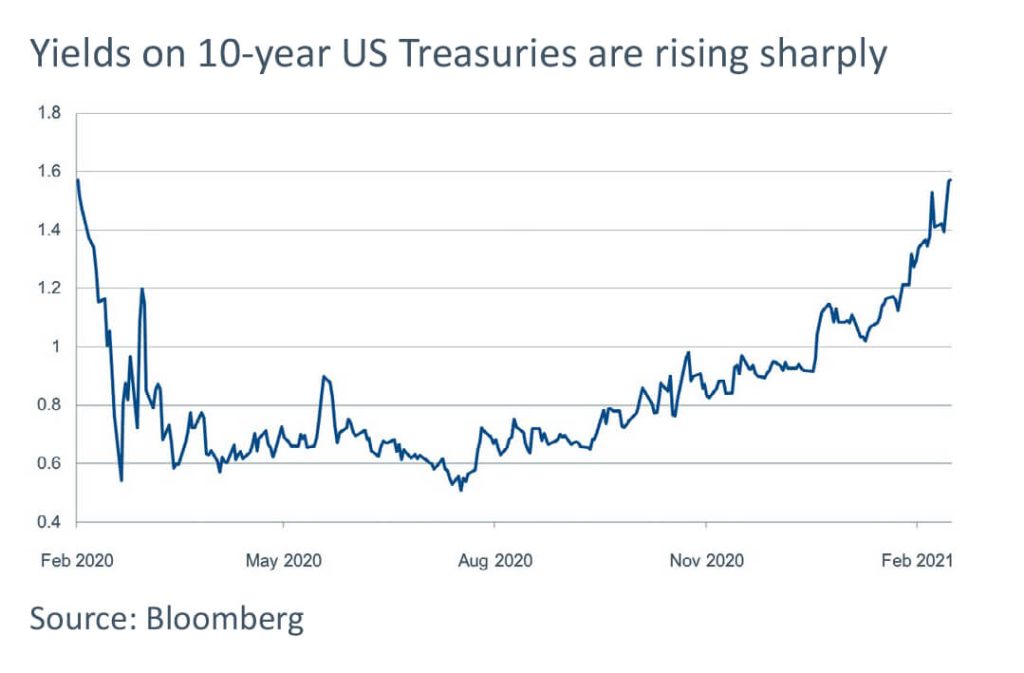 It all sounds positive, but smart investors should always be wary – exuberance can lead to bubbles and rumbles in the bond markets are making many investors nervous.

US political strategist James Carville said in the 1990s that if he was ever reincarnated he wanted to come back as the bond market because then “you can intimidate everybody”.  We are being reminded of what he meant.

In the past few weeks yields on 10-year US Treasuries – a core benchmark for global debt markets – have climbed above 1.5%. At one point last year they were at a record low of 0.318%. That does not sound much of a difference, but it is a meaningful move and the speed of the change has spooked markets.

Rising yields are painful for bondholders and a continued rise could also destabilise the equity markets. They are currently providing impetus for a rotation into more cyclical parts of the market where prices relative to projected earnings appear more muted. High-growth, technology-focused company shares that performed so strongly last year have pulled back in the past few weeks. As a firm we have limited our exposure to government bonds, preferring inflation linked bonds and shorter duration credit. And we had already taken steps to rebalance equity portfolios, adding to names more exposed to this cyclical rotation.

At what point might rising bond yields really start to intimidate and seriously trouble the equity markets? Credit Suisse views a level of 2% on 10-year US Treasuries as a potential threat to market stability. There is still some way to go, but speed of movement is an issue too. If the rise in yields moves too far too fast then what has started as a rotation could become a wholesale correction.

At the root of the problem is concern about inflation. We have not had to worry about high and persistent inflation for some time. Indeed, many central banks have been more concerned about deflation over the past decade.

A year on from the crash – when at one point the price of oil futures went negative – we can expect to see a short relative spike in annual inflation figures. But could inflation prove more obdurate? It seems likely that prices for goods and services will rise higher in the year ahead as spending picks up and economies recover, meaning demand could outstrip supply. There are clear signs of tight supply in a number of areas – since the start of the year container shipping costs between China and Europe have risen over 40%, and there are reports of bottlenecks in major ports.

If bond yields continue to rise then all eyes will turn to the central banks and their response. In most major economies central banks have continued to act to keep borrowing costs and bond yields down. Will they ride to the rescue to try to contain them now? In 2020 the Federal Reserve purchased over $1.85 trillion in notes and bonds. At what point might Jerome Powell and his ilk intervene to do more? At the moment they are standing back.

Of course, investors will argue that action is needed to stabilise markets if we start to see major falls in equity markets. But further intervention is not without a degree of moral hazard. A move to bring yields down further along the curve could act as a huge buy signal to the equity markets, causing a ‘melt up’ and creating a bubble.

Beyond the wall of worry

It is easy to be distracted by short-term turmoil. Investors should focus on the longer-term trends, and there is a lot to be positive about. Though huge levels of government support have kept many businesses alive in the past year, plenty of sectors have thrived unaided. Advances in technology have made huge differences to how we live and work, and we believe that the pace of innovation is set to continue.

New business formation was 43% higher in the US in January than the same month last year. The pace at which pharmaceutical companies responded to the urgent demand for vaccines also highlights continued innovation in the healthcare sector. Interestingly, some of the most important development came not from established vaccine makers like GlaxoSmithKline, Merck or Sanofi but from relative unknowns, including Moderna and BioNTech. We remain constructive on the long-term opportunities in this area of the market.

The past year has served as a reminder that the biggest and most dangerous threats often appear from leftfield and bring about fundamental changes few could have predicted. But it is also a reminder of how adaptable and innovative humans can be in responding to and resolving major problems. We should not forget that.

We are watching bond markets closely, acting prudently and retaining proportion. One of the biggest threats that investors face is their own pessimism. Scepticism and worry are necessary features of wise investing, but most successful investors take the long-term view and are optimists at heart.

The first confirmed case of Coronavirus in the UK was on January 29th 2020, when a Chinese student in York and his mother, recently arrived from Wuhan, called the NHS…

Shock therapy for the UK economy

This summer update was the Chancellor’s attempt to apply a defibrillator to the UK economy. Rishi Sunak set out the scale of the challenge facing him. In the past two…